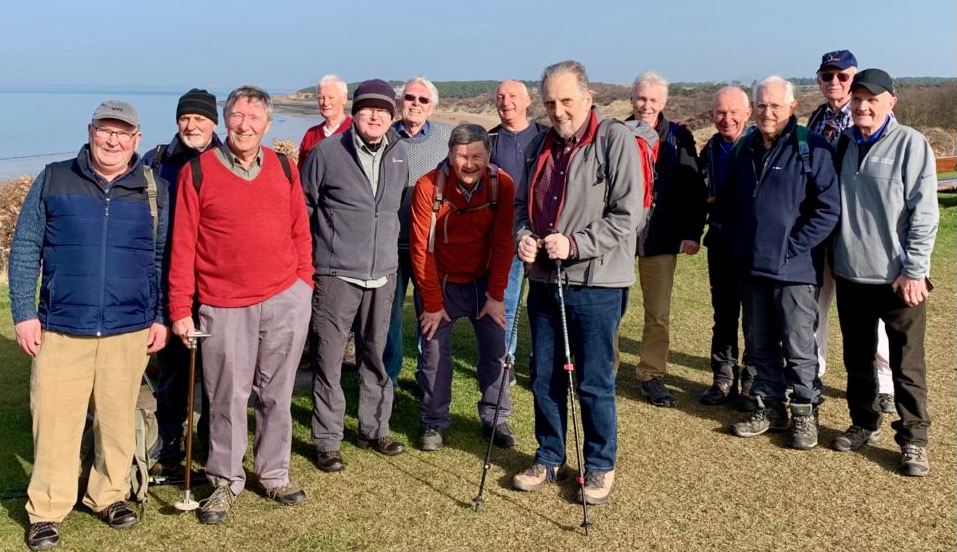 It is with much sadness that we report the death on Thursday 12th November of our much-valued member and good friend, Iain More, aged 79.  Iain (in photograph above, with walking poles) was diagnosed 13 years ago with advanced prostate cancer, but he continued to be very active, both mentally and physically, until very recently.

Iain was a hardworking and dynamic member of our committee for 5 years, and made a great contribution to our meetings through his organization of our speaker programme.  He made many friends and business contacts over the years through his charity fundraising business Iain More Consultants (now More Partnership), which he founded in 1989 in Dundee.  Iain used those personal friendships to great advantage when putting together his impressive list of speakers for our group.

Iain led a very full and colourful life prior to his arrival in our midst, including working for the US Democrat party campaign during the 1972 presidential election, and founding and running a folk and jazz club in Salem, Oregon.  He was also a championship swimmer, competing both for Scotland and for the UK in his younger days.  Iain’s enthusiasm for physical wellbeing led him to become a powerful moving force and member of the Board of Trustees of the Observatory for Sport in Scotland.  He was also a keen supporter of our ELPCSG walking group, despite his increasingly restricted mobility.  More details of Iain’s interesting life can be found by clicking on   morepartnership.com.  and selecting the green news panel on the title page.

Iain will be sorely missed by all of us in ELPCSG.  It is hoped that his forthcoming memorial service will be made available to members through a webcast, in which case we will pass the details on to you. The group sends their sincere condolences to Iain’s wife Pam and their family.