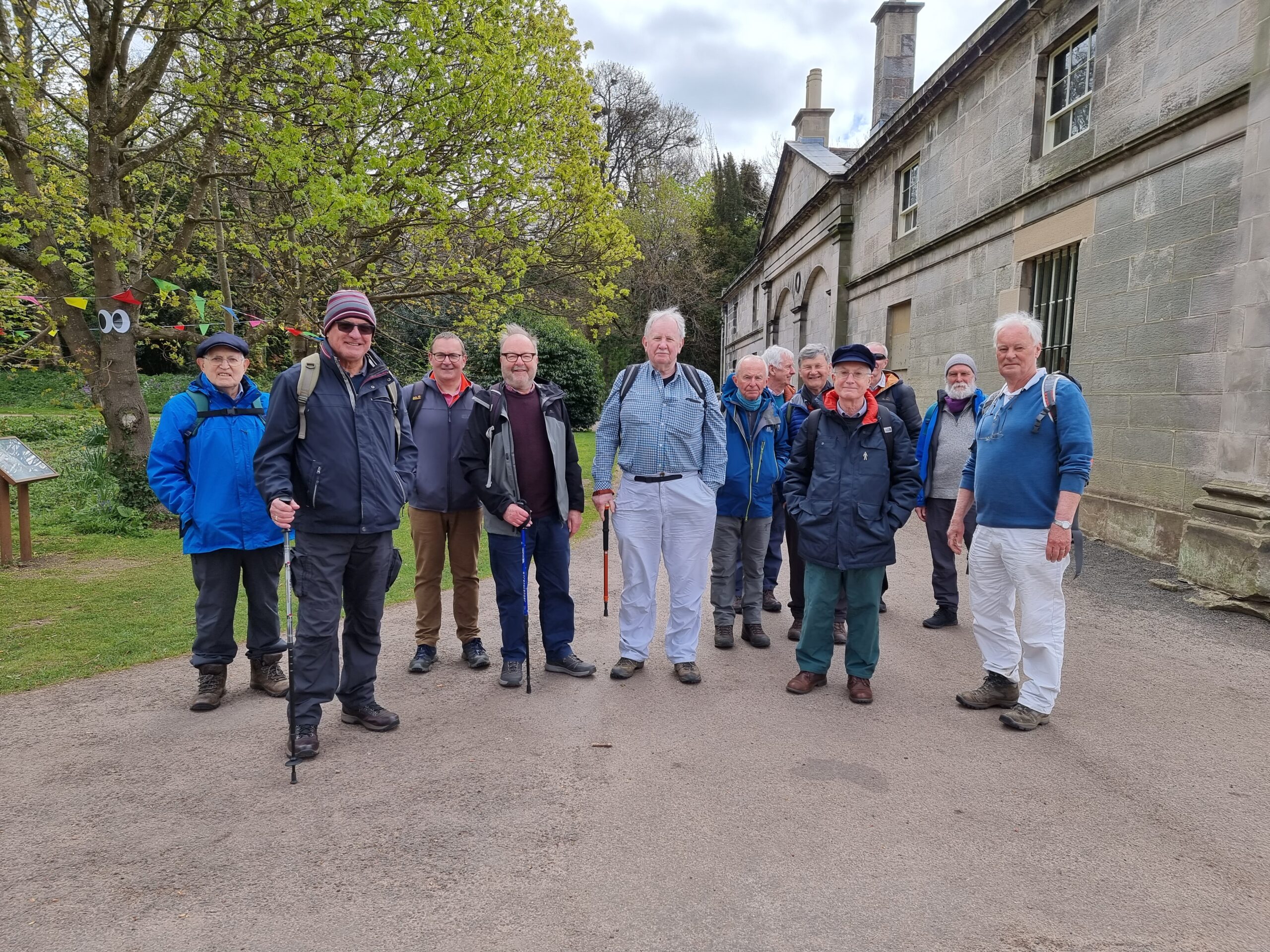 Walking group outing number 43 took place on Wednesday 27th April 2022, exploring Newhailes estate and the Fisherrow area of Musselburgh.  A light lunch followed, and as ever, the group had a great time.

Many thanks again to Larry Foster for providing the photos and some interesting notes on several of the places visited during the walk (below).

Designed and built circa 1686 by the architect James Smith, Newhailes House was his family home for himself, his wife and 34 (thirty four) children! A Palladian style, stands in 80 acres of Parkland. Sir David Dalrymple purchased the Estate In 1709 and commissioned William Adam to design a new staircase and hall. He renamed the house Newhailes in recognition of Hailes Castle on their family estate at East Linton and added the east wing as a library. This anticipated the
beginnings of the Enlightenment culture, based on close readings of new books, and intense intellectual discussions took place daily in Edinburgh in select society. Sir David was a Scottish advocate and politician who sat in the Parliament of Scotland from 1698 to 1707 and in the British House of Commons from 1707 to 1721. He served as Lord Advocate, and eventually Auditor of the Exchequer in Scotland in 1720. They were to become a wealthy Edinburgh legal dynasty; it would also become the golden age of artistic and intellectual development in Scotland. The National Trust for Scotland acquired the house and gardens in 1997 and continue to manage the property and grounds.

The Cafe is housed in the old Stableblock, which was designed by James Craig and built in 1790, although it was extended in the 19th Century to its present form.

The ‘Earl Of Stair Monument’ which was built in 1746 and is in memory of John Dalrymple, brother of Sir David Dalrymple. He was a Scottish soldier and diplomat.
John Dalrymple, 1st Earl of Stair PC (10 November 1648 – 8 January 1707) was a Scottish politician and lawyer. As Joint Secretary of State in Scotland 1691-1695, he played a key role in suppressing the 1689-1692 Jacobite Rising and was forced to resign in 1695 for his part in the Massacre of Glencoe. A dark figure. Restored to favour under Queen Anne in 1702 and was made Earl of Stair in 1703, he was closely involved in negotiations over the 1707 Acts of Union that created the Kingdom of Great Britain but died on 8 January 1707, several months before the Act became law.

Known as the Pleasure Grounds, within the Newhailes estate are the remains of the 18th Century Shell Grotto. “The outer walls would have been carved stone, embedded with sparkling minerals, shells and fragments of porcelain. On the inside, the walls were once decorated with shells from nearby Musselburgh and as far away as the East Indies.” The Tea House which was built in the 1740’s and was used to entertain guests. A picture window was located in one of the missing walls and would have provided views of the burn which runs through the Estate and under the tea house etc and joins the Brunstane burn.

The name, Musselburgh, derives from the extensive mussel beds which lie along its shore on the Firth of Forth. Its also famously known for its part in fishing for herring (known as silver darlings) By the mid-nineteenth century, many fishing towns and villages were established around the coast of Scotland and at the peak of what is called the ‘herring boom’ in 1907, 250,000 tons were caught, cured, gutted and packed, before finally being exported by thousands of Scottish workers from all over the country.

Each year, fishermen travelled down the coast, following the herring shoals all the way from the Hebrides on the West Coast of Scotland in May, to Northumberland which they reached by mid-September. Although it was the men who did the fishing, women played an equally crucial part: each year, 6,000 Scottish herring lasses traveled from port to port to gut and pack the herring, or ‘silver darlings’ as they were also called. Being away from home months at a time, they packed with them a kist – a wooden chest containing all their belongings for the season. Very painful hard work, 7 days a week, salt and brine not enough to keep cuts and infections clean from gutting. Herring lasses though enjoyed more financial freedom than some of their contemporary counterparts by earning their own wages, and, by traveling for work for months at a time, they also experienced some social freedoms as well.

Musselburgh is known as “The Honest Toun”, and celebrates this by the annual election of the Honest Lad and Lass. Dates back to 1332, when the Regent of Scotland, Randolph, Earl of Moray, died in the burgh after a long illness during which he was cared for by the townsfolk. His successor offered to reward the people for their loyalty but they declined, saying they were only doing their duty. The new regent, the Earl of Mar, was impressed and said they were a set of honest men, hence “HonestToun”. Worth mentioning the Brunton Theatre, originally Brunton Hall was opened in 1971 by Queen Elizabeth, the Queen Mother. The building is named in honour of John D. Brunton, of the Brunton Wireworks, who died in 1951 leaving £700,000 to the people of Musselburgh. He wished the money to be used to provide community halls.